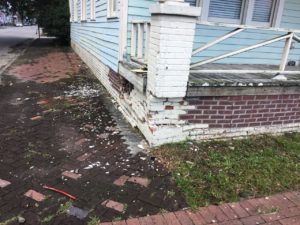 Warm, dewy spring is here, which means hot, humid, thunderous summer is on its way. Comforting and beautiful thunderstorms are a namesake for Savannah, adding to its southern charm. However, these relaxing natural occurrences are also the cause of many potential floods. Georgia’s summer thunderstorms can add an additional 5.5 inches of rain, and often result in excess precipitation. Here are the three major types of flood hazards:

Riverine Flooding is determined as the cause when a watershed or embankment is slowly filled to capacity, and then eventually overflows in a particular area. Riverine flooding is often caused by large amounts of rainfall at one time, which creates serious soil saturation and intense runoff within the aforementioned particular area. However, a break or failure in the Savannah Bluff Lock and Dam is always a potential cause of flooding, and the severity of the flooding may be exacerbated by nearby bodies of water naturally flowing. Riverine floods are a generally slow-growing hazard that then can last for weeks. Fortunately, riverine flooding usually has the potential to be accurately predicted. Therefore, some emergency restoration services are able to mitigate the effects to your home before the riverine flood has completely subsided. This is done by temporarily boarding up or shoring the structure.

These are floods that occur violently and at a very quick pace, within six hours of initial rainfall. The damage of a flash flood can be exacerbated by poor drainage, sewage, and filtration systems, which can cause additional pooling around foundational structures and other concave areas of land. Here in Savannah, where certain areas of the urbanized city are densely populated, non-porous surface materials such as concrete and cement cover porous surfaces such as grass. This can also significantly increase flash flood hazards, as there are far fewer safe areas for the water to escape, so the water finds the path of least resistance, which is oftentimes homes. Because flash floods are so unpredictable, they have the potential to cause greater property damage than a riverine flood, and emergency restoration services are often at a greater demand.

These occur when waves and storm surges from the ocean create tropical weather events such as hurricanes, tropical storms, and tropical depressions. Georgia is not considered a coastal state, but is nevertheless susceptible to episodic tidal flooding and storm surge inundation, oftentimes due to the city’s proximity to the Savannah River. Storm surges affect floodplains by dune overwash, tidal elevation rise in inland bays and harbors, and backwater flooding through coastal river mouths. Additionally, certain storm surges can last for days, wreaking havoc the entire time. A storm surge can come before a hurricane, which is the most detrimental tropical weather event, and, when combining the two, can be catastrophic. Savannah is particularly prone due to its lack of protection from the Atlantic Ocean, as well as the extensive bodies of water that would contribute to flooding.

Before a flooding emergency occurs, it’s important to familiarize yourself with what your local emergency restoration services provide.

Harper Special Services is a family owned and operated emergency restoration service company. With more than 50 years of combined experience in the emergency restoration services industry, they provide unprecedented service in water and mold restoration, floor restoration, board ups, temporary shoring, roof tarps, and debris removal, just to name a few services. They offer emergency team members 24 hours a day, seven days a week, and promise fast response whenever disaster may strike. With an IICRC certification and an A+ rating on the Better Business Bureau, this team is fully licensed to service Savannah, Savannah Quarters, The Landings, Skidaway Island, Tybee Island, Wilmington Island, and all surrounding areas.

Nowhere is as beautiful as Georgia in June. However, few places are also as dangerous. When disaster strikes, be sure to call Harper Special Services this summer to make sure you can keep enjoying yours.

Get experts on the job to ensure your restoration or renovation project is in good hands. Our team consists of seasoned professionals with years of experience in construction and renovation – we’re experts you can rely on.

Payment Method: We accept all major credit cards and checks, as well as work with all insurance companies.